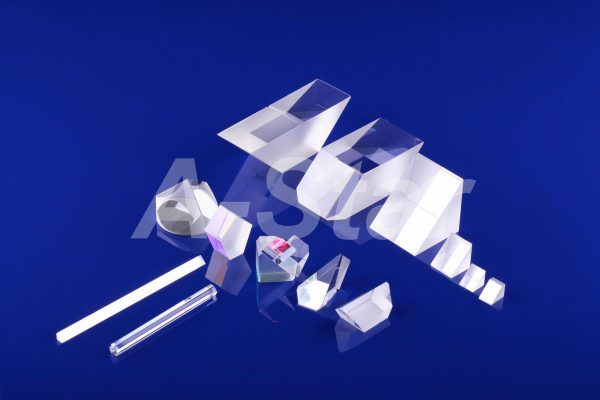 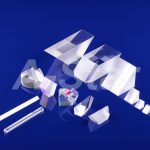 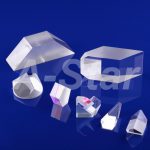 Dispersing Prism
Dispersing Prisms are used to separate a beam of white light into its component colors. Generally, the light is first collimated and then dispersed by the prism. A spectrum is then formed at the focal plane of a lens or curved mirror. In laser work, dispersing prisms are used to separate two wavelengths following the same beam path. Typically, the dispersed beams are permitted to travel far enough so the beams separate spatially. A prism exhibits magnification in the plane of dispersion if the entrance and exit angles for a beam differ. This is useful in anamorphic (one-directional) beam expansion or compression, and may be used to correct or create asymmetric beam profiles.

EQUILATERAL dispersion prisms have three equal 60° angles, which are made of optical materials with high difference of refraction indexes for different wavelength, such as the SF10.

LITTROW prism
Light crossing the LITTROW prism is spectrally dispersed with simultaneous inversion of the path of rays caused by the reflection taking place on the back surface of the prism. The reflection surface has to be mirrored coating.

AMICI prism (Direct Vision Prisms)
The AMICI prisms generate dispersion of polychromatic light with simultaneous correction of divergence. All the dispersed beam output from the prism are parallel to the input beam. These Prisms consist of three prisms, which are cemented together. Two of the three prisms (A prism in the left draft) are made of different material to the other prism (B prism in the left draft). Typical combination of materials are Flint glass for A and Crown glass for B.

Note: Dimension and specification are available upon requests.